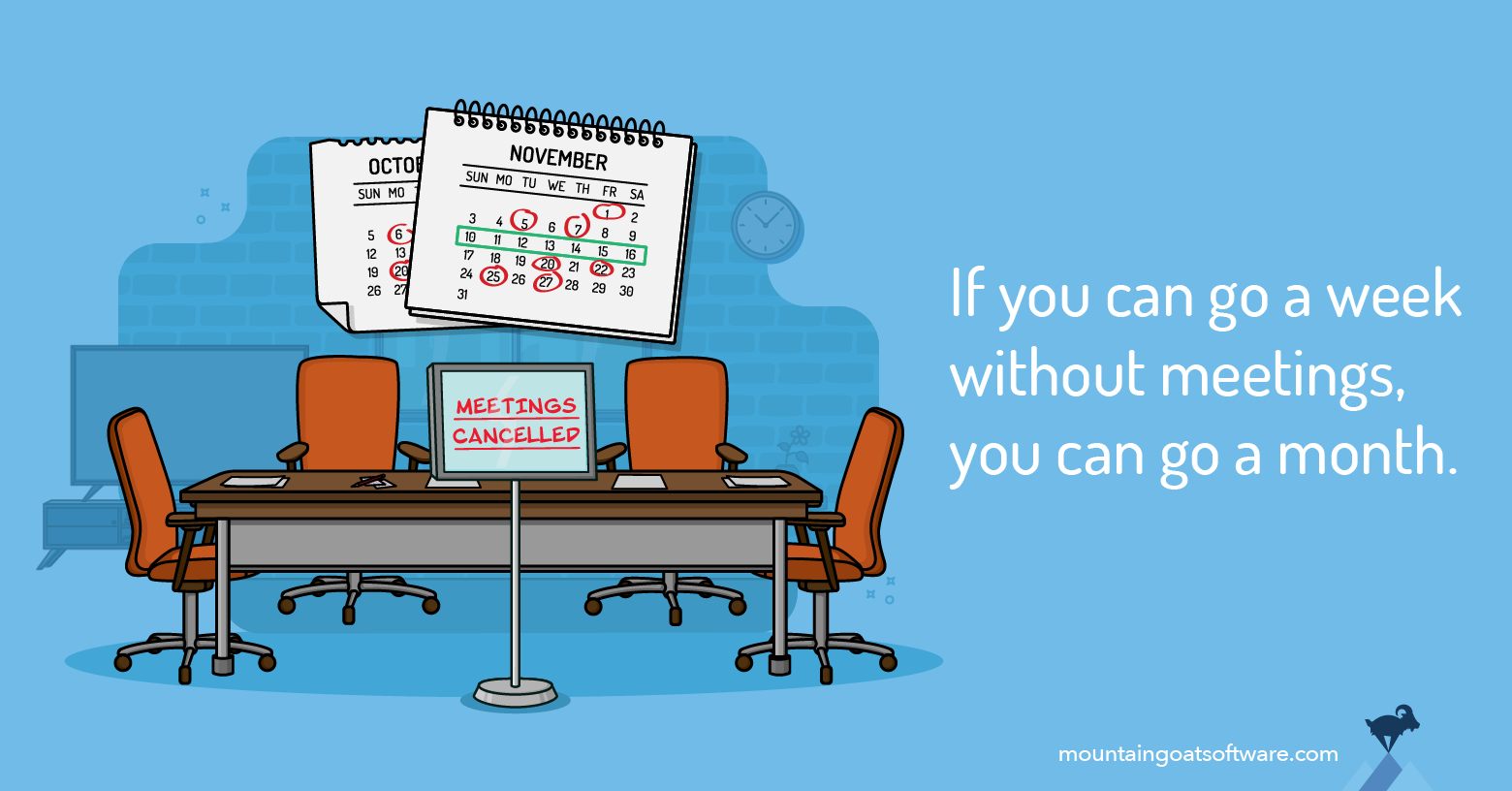 I read with interest about Google’s recent adoption of “No Meeting Weeks.” Initiatives such as this have been proposed and used many times by many companies in the past. Google’s is in response to the increased fatigue many of us feel from the shift to all-remote work.

As appealing as it sounds to have a week with no meetings, I think it’s a bad idea.

The resurfacing of this idea, popping up afresh every few years, leads me to reason that it must not work. Companies start with great fanfare but then meetings inevitably begin to get added back onto employees’ schedules. And then, five or ten years later, companies again announce the return of no-meeting weeks.

This happens because meetings are helpful.

Or they should be. And they can be, if run well and with the right participants.

I’ve always disliked unnecessary and lengthy meetings. Years ago, before starting Mountain Goat Software, I was employed by a large company. As is typical, they held too many meetings.

I tried an experiment. We would begin each meeting by randomly selecting someone to leave the meeting. They either had to or got to leave, depending on your perspective (and theirs). The intent was to give people the gift of an unexpected hour back in their schedules.

Other times, though, the person selected to leave was not critical to the meeting. When such a person was randomly chosen, the meeting would proceed just as normal.

I always wondered how people felt when they were randomly chosen and no one suggested that we couldn’t do the meeting without that person.

While randomly selecting a person to not participate was soon abandoned, the experiment showed everyone there the importance of making sure each meeting had the right people but also only the right people.

We stopped including someone who might benefit from a meeting. For a while this really helped keep our meetings smaller, which also kept them shorter.

When I was young, my mom and dad would take my younger sister and me on family vacations. These usually involved driving somewhere in the western United States. I remember driving to Yellowstone National Park one year. We took three days to drive there from southern California, stayed for two nights, and then drove home.

I think Dad was exaggerating. But there is a grain of truth to what he said.

Some Alternatives to “No Meeting Weeks”

Can we get by without a sprint planning each Monday? Sure. We recently did during Thanksgiving week when many team members were on holiday.

But that weekly meeting is genuinely helpful.

If it wasn’t, rather than abandon the meeting, we’d first see if we could fix the problem. There are many things I’d consider before abandoning a meeting, including:

There are many things you could try to help a meeting achieve the desired goal.

And, of course, I’d definitely consider whether the meeting is needed at all. Many organizations start holding a type of meeting and then continue holding that type of meeting long after it’s ceased being useful.

An alternative to “No-Meeting Weeks” that I have seen work well are no-meeting days or certain hours when meetings aren’t scheduled. These work because it doesn’t harm a team to say, for example, “No meetings before noon.”

But avoiding all meetings for a week has the potential to cancel meetings that are worth doing along with those that aren’t.

A better strategy would be to consider each of the meetings you wish you could forgo attending. And for each, either fix the problems with the meeting or cancel that meeting altogether.

Has your organization tried “No-Meeting Weeks”? If so, how did it go? And what have you tried to make meetings more efficient and effective in your organization? Please share your thoughts in the comments below.