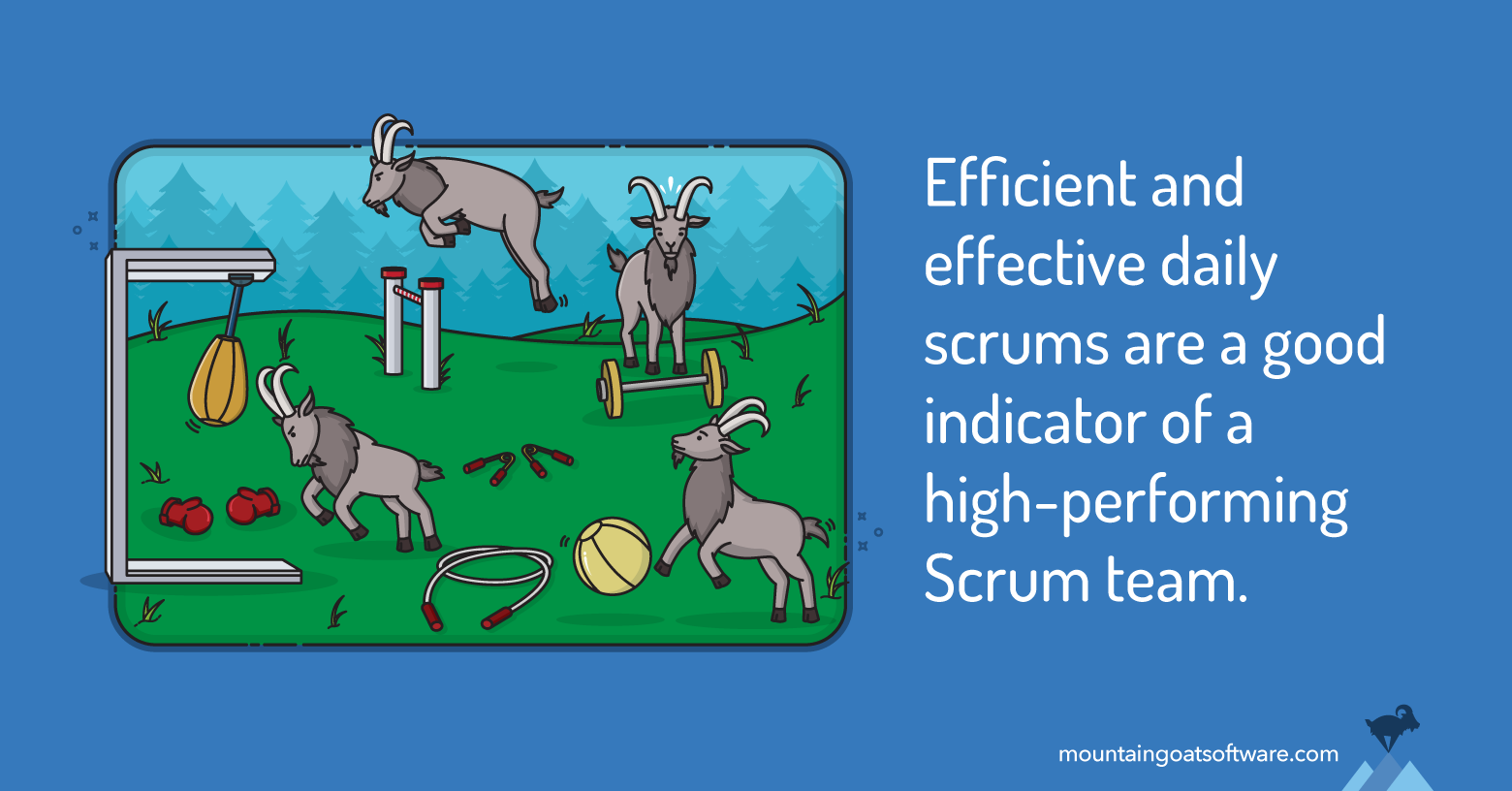 In a recent weekly tip email to subscribers, I offered six ways teams could make their daily scrums more useful. (If you aren't subscribing to those, here's how.) But I had such a hard time limiting myself to six that I thought I'd share a few more here. With that in mind, here are ten tips for improving your daily scrum meetings.

1. Only Talk About the Work of the Current Sprint Preparation for the Coming Sprint

Discussion should be limited to work team members performed in pursuit of the team’s sprint goal.

Beyond that I allow a little bit of discussion about work preparing for the next sprint. For example, “I split the stories for next sprint and think they’re all small enough now. Also, I scheduled time with Miss Important so we can meet with her next sprint.”

2. Limit Discussion to What Was and Will Be Accomplished

Instead of asking participants to describe what they did yesterday and will do today, ask instead about what they accomplished and will accomplish. What I did yesterday might include screwing around on social media for 90 minutes and then losing another hour reading sports updates. What I accomplished would be focused solely on the product being built.

3. Talk About Impediments, Not “Blockers”

The word impediment is a mouthful. Four syllables, ten letters. So it’s understandable that a lot of teams talk instead about “blockers.”

I encourage you, though, to stick with impediment. In a daily scrum, you don’t want to hear only about things blocking progress. You want to hear about everything that might be impeding progress.

Think about it this way: I have my annual physical coming up next week. I ask my doctor how my arteries look. And he says, “No blockers.” Phew. I leave the appointment relieved that I seem safe from an impending heart attack or stroke. Meanwhile, my doctor’s notes say that blood flow is 99% impeded, but not fully blocked.

4. Give People Something to Say About Their Work not Directed Toward the Sprint Goal

Sometimes team members have spent a significant portion of the prior day on work that isn’t related to the sprint goal. Perhaps a manager needed them on a special project.

It can be understandably tempting to describe this work. But the guidelines I’ve presented don’t allow it, as the work was unrelated to the sprint goal.

Give team members a phrase to use whenever they worked outside the planned work of the sprint. I like the simple phrase “other stuff.” Allowing this lets the person state that they did more than their goal-related work may indicate. This can help them feel better. It takes essentially no time and can tell a Scrum Master if someone is working too frequently on non-sprint work.

5. Give Team Members a Way to Indicate When Someone Is Rambling

For cases when speakers don’t notice they are going on too long, give team members a way of indicating a person has talked too long. I’ve seen teams use buzzers, hold up rubber rats (to indicate someone is “going down a rat hole”), or even use an Elmo doll, indicating “Enough Let’s Move On.”

6. Have People Point to What They’re Working On

Sometimes in a daily scrum it can be hard to understand how one person’s update relates to the sprint goal or even the sprint backlog.

A good solution to this is to ask the person to point to what they’re working on while speaking about it. This is especially easy with a collocated team and a physical task board. When I start to give my update, I approach the board and variously point to the items I’m working on. This makes the updates very easy to follow. It also makes it obvious when someone is working on something outside the accepted scope of the sprint.

It can work well for a distributed team using a software tool for managing the sprint backlog. As I proceed through my update, I scroll the tool to show the item I’m speaking about or ask the Scrum Master to do so.

It is very common in a daily scrum to update the sprint backlog. Usually this will take the form of someone saying, “And I made good progress on this task here. I think I’ve got about two hours left.” And as the person says that, they cross off the current number and write “2.” Or, if using software, the Scrum Master might update the effort remaining on that task.

This is a good thing for many teams as it helps them assess their progress through the planned work of the sprint. However, you don’t want the daily scrum to become all about those numbers.

I see this happen when, for example, a team member says “I have three hours left on this task and expect to finish it today,” and that team member’s estimate of three hours is discussed. That could happen when someone questions the estimate, wanting it to be larger or smaller.

It can even happen if the Scrum Master asks for clarification in order to update some tool being used to track the sprint. At that point the team member needs to clarify which task it is in the tool and that yes, three hours is the correct new estimate.

This derails the meeting from talking about the work.

I encourage updating of the sprint backlog during the daily scrum, including updating any estimates of effort remaining. But don’t let those updates become the focus of the daily scrum.

8. Vary How the Daily Scrum Is Conducted

Most daily scrums are conducted person by person. You tell us what you did, what you will do, and anything slowing you down. Then I do the same. And so on.

There’s no rule that says you have to do it that way.

9. Keep Everyone Guessing as to Who Will Speak Next

When we know it will be our turn to speak next in a meeting, many of us tune out the current speaker while we mentally prepare what we’ll say. To avoid this happening in your daily scrums, have the current speaker call on the next speaker. Have a rule that nobody is allowed to simply call on the person next to them. Add a bit of fun by having a person “lose a point” if they call on someone who has already given their update. Add things like if a person loses three points, they have to tell a joke or host the retrospective. The possibilities are endless.

10. Make it Painful (Literally) to Ramble too Long

I picked this tip up from Kayleigh, a great Scrum Master for her team. She bought a small medicine ball. Two or three kilograms (4.5 to 6.5 pounds) works nicely. While giving an update, each person holds the ball directly in front of them. For most of us, that weight is just enough to keep us aware when we go on too long.

What tips can you share that have helped with your daily scrums? Please share your thoughts in the comments section below. 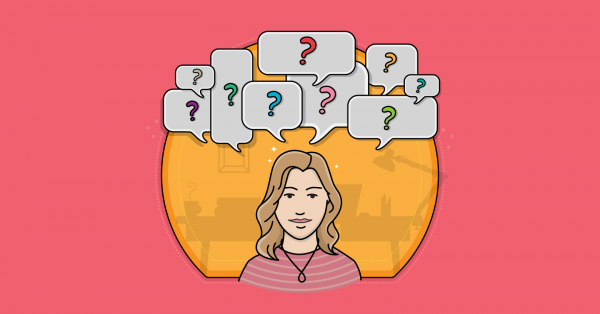 Nine Questions Scrum Masters and Product Owners Should Be Asking 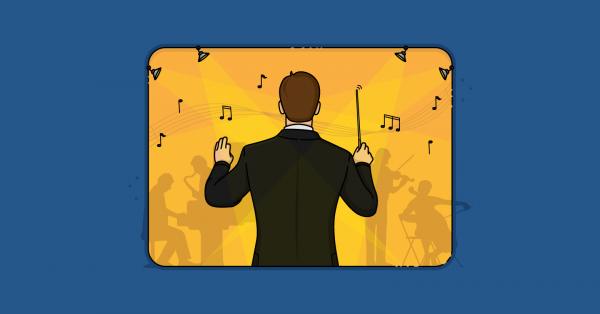 Eight Tips to Become the Scrum Master Your Team Needs

There are so many things a great Scrum Master does, it’s easy to overlook a few. The 8 tips here …