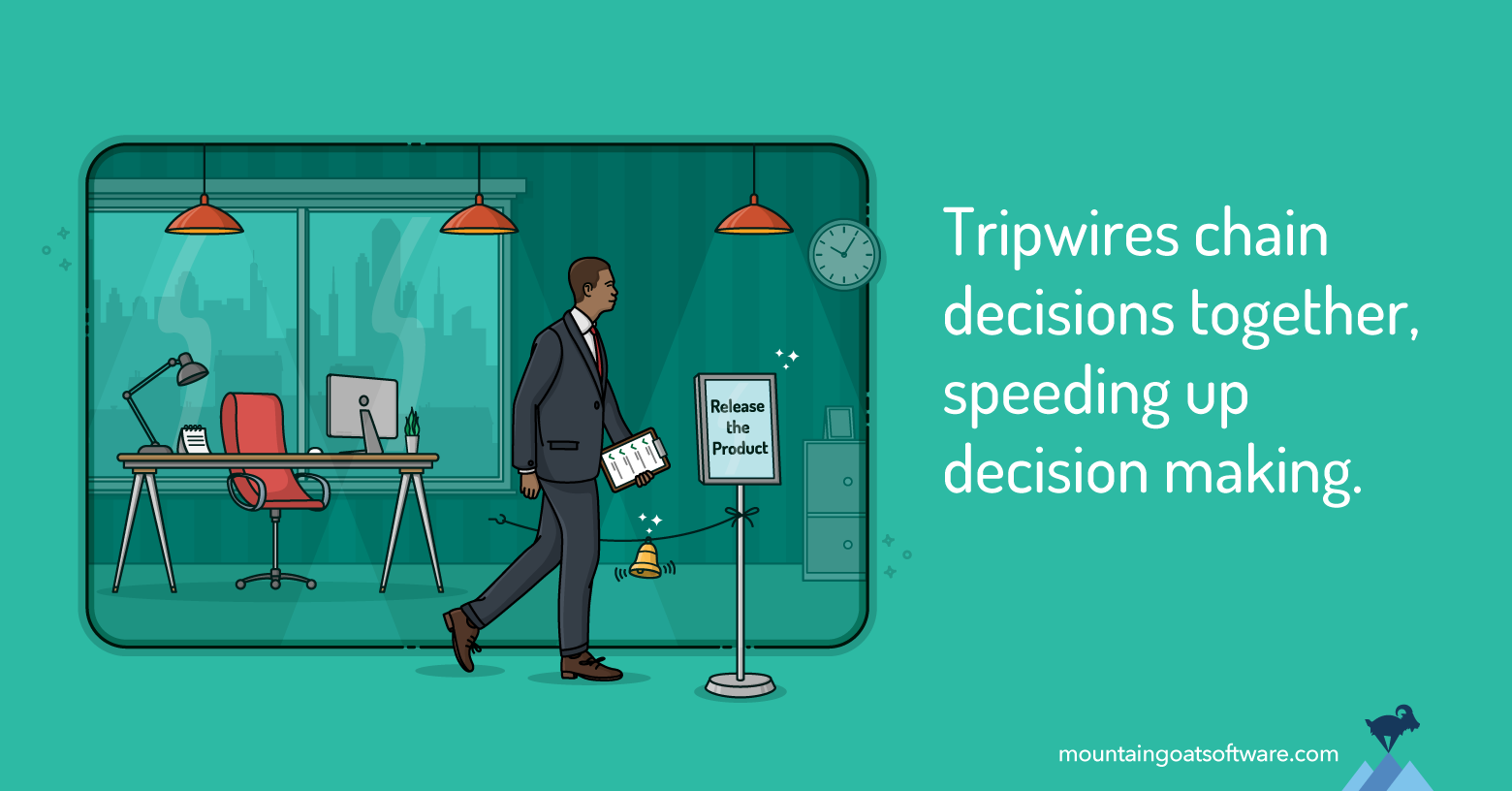 The ongoing COVID-19 pandemic has certainly disrupted everything, including our business. That will happen when a large portion of your business requires being together in person, and much of our training and coaching business did.

It’s caused us to accelerate plans for ideas we were considering, such as virtual delivery of our Certified ScrumMaster and Certified Scrum Product Owner courses.

Because we needed to move quickly, we had to make decisions as efficiently as possible. We didn’t want to eliminate valuable research and analysis activities. Reducing either would lead to faster decisions, but would increase the likelihood of making bad decisions.

What we reduced instead was the waiting time between decisions. We did this through the use of a technique known as tripwires.

I learned this from a boss I had in New York City many years ago. We were developing custom database software for law firms, often on unbelievably aggressive deadlines.

My boss, Steve, was an attorney and the manager of a project billing the law firm $6 million per month as part of the legal defense of one person. In short, Steve was busy.

I usually got a few minutes with him each day but that was it. What that meant was that our conversations took on the tone of a programmer’s if-then statements.

Steve would tell me to write a specific program. If it found interesting data in our database, I was to follow that up with a second program. But if the first program didn’t find any interesting data, I was to move onto a completely different program. He’d often chain three or four decisions together in this manner.

Contrast that with a typical email chain sent these days to schedule a meeting: 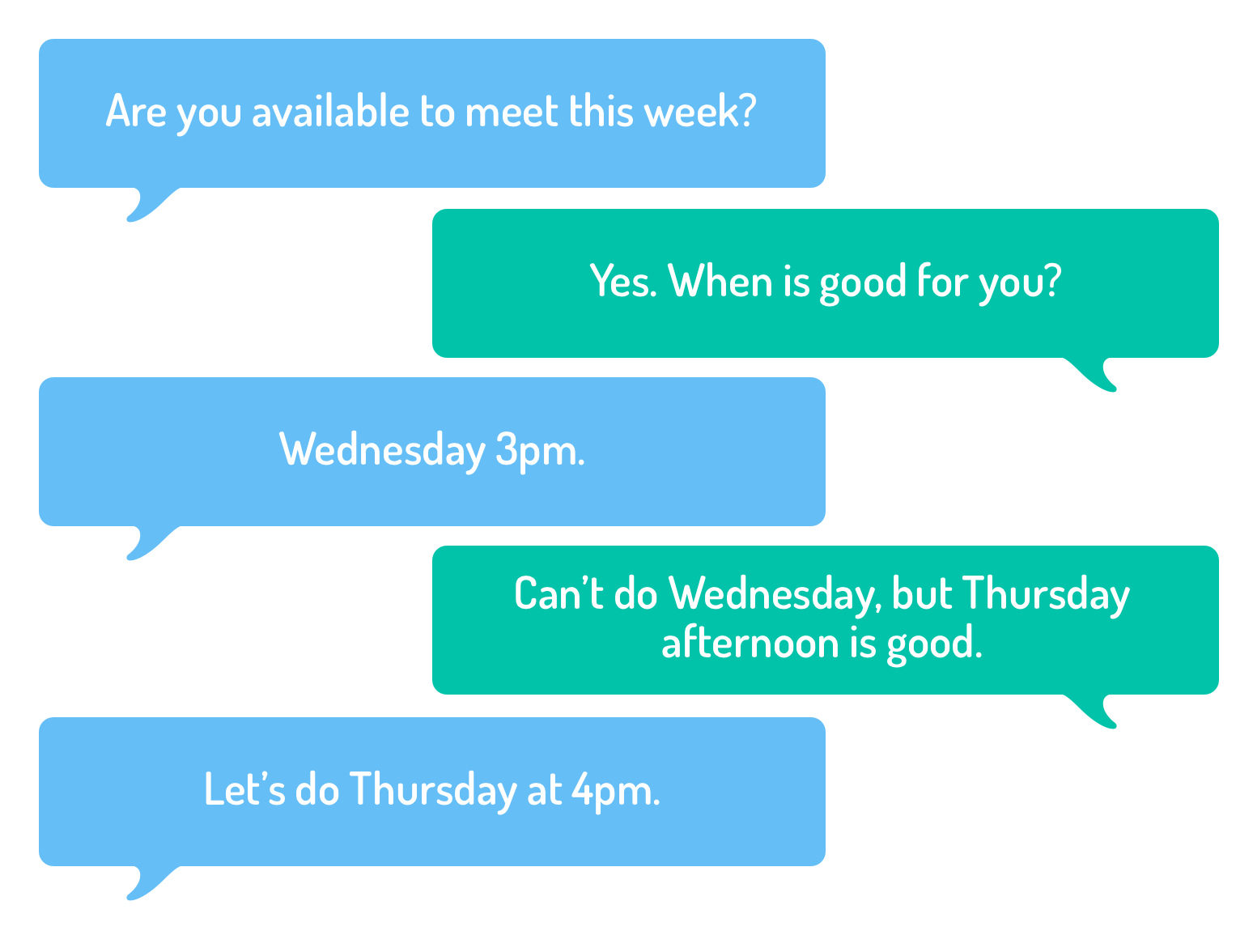 Steve’s approach enabled me to have one conversation in the morning and then know exactly how to proceed all day.

A tripwire is a passive trigger. Outside the business world, imagine a movie in which the hero is running through the jungle and trips over a wire stretched across the jungle floor. Stretching that wire triggers something—poisoned arrows shot at our hero or perhaps a large rolling rock bearing down on Indiana Jones.

In a business setting, a tripwire is a decision you make now, which you will enact if a future event transpires. For example, Steve told me that if the first program found interesting data, I was to write a specific second program. The success of the first program acted as a tripwire—if successful, I would spring into action writing the second program. No further instructions needed.

Let’s look at a couple of examples.

Scheduling the Meeting with a Tripwire

Think back to the exchange above, with two coworkers trying to schedule a meeting. That exchange could have been much easier if the initial email had said, “Are you available to meet this week? If so, tell me the best appointment time for you from these choices: Wednesday or Thursday at 2, 3 or 4pm.”

The if in there is the tripwire. If you’re available, let’s meet at one of these times.

Of course, there’s no guarantee the person can meet at the given times. If that seems likely, offer more times or add a second tripwire.

The second tripwire could be in this form: “If none of those work, I can also do any time Friday morning, but Wednesday or Thursday are better.” The if again indicates the tripwire.

How We’ve Been Using Tripwires

I started this post by saying we’ve been using tripwires to speed our decision making. Let me share a couple of examples.

First, as part of changing our Certified ScrumMaster and Certified Scrum Product Owner courses to virtual delivery, we’ve needed to develop some of the tools used during the courses. As the product owner for that software, I discussed the needs with our CTO, Hunter.

This project would involve some technology that was new to us. And so Hunter and I agreed that his team would conduct a few experiments with the technology. The success or failure of each experiment would trigger what to do next. 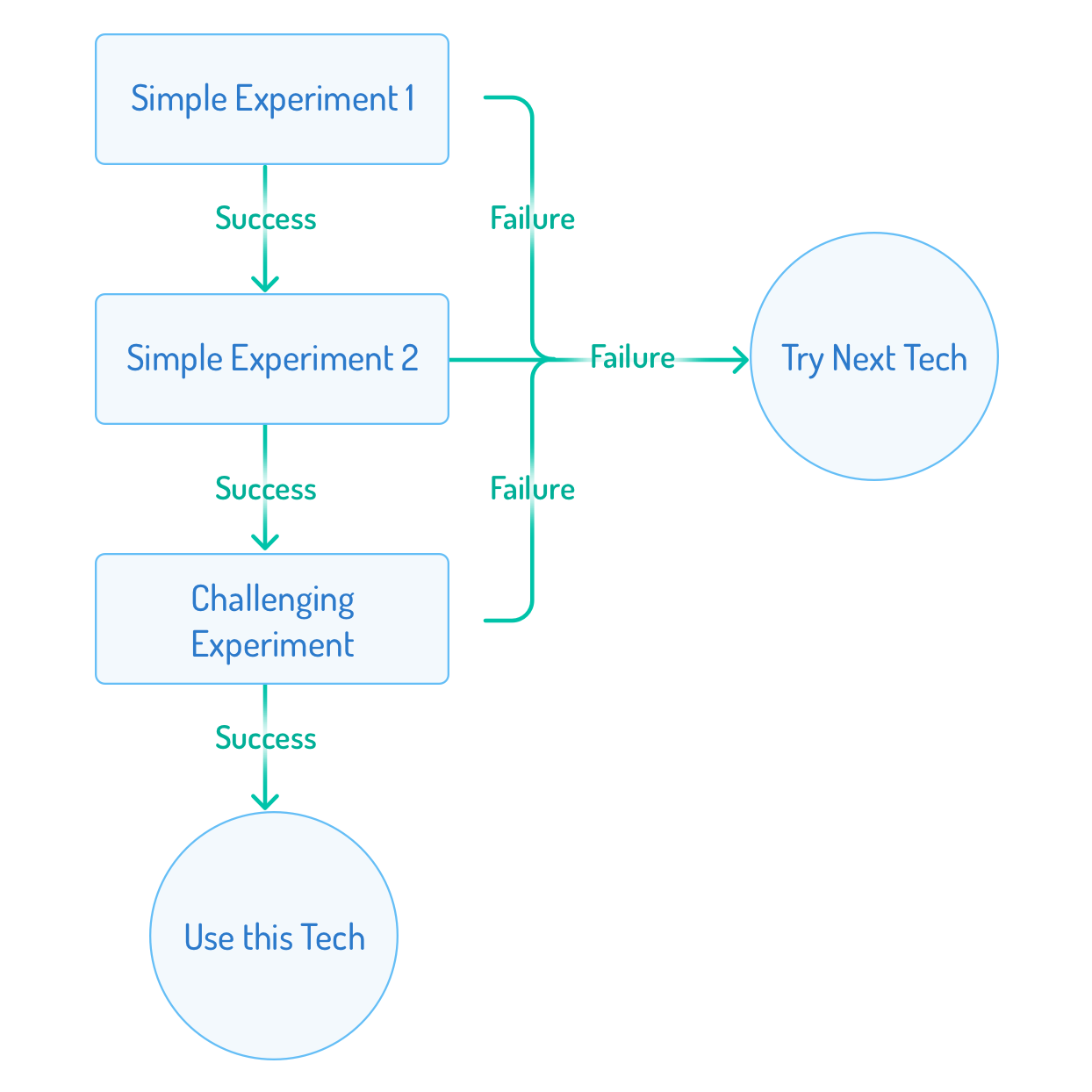 A second example will illustrate how we used tripwires in business decisions. In designing our virtual certified scrum courses, I had a theory that these courses should include both live and recorded videos. The recorded videos would include the vast majority of the lectures, freeing the live time for exercises and discussion. Recorded videos would also enable course participants to take part of the course on their own schedules.

Naturally, we wanted to test our theory. And so we ran two virtual courses, one each of Certified ScrumMaster and Certified Product Owner. We did not immediately schedule subsequent courses. We couldn’t do that, we reasoned, until we knew whether the initial courses were successful.

We established a tripwire that we would schedule more courses if the post-course survey sent to participants yielded five times more positive comments than negative ones about the use of recorded video for portions of the course.

When that tripwire was triggered, the team here knew to schedule more courses, which they did without involving me in the decision. The first I heard was when they told me I’d been scheduled to teach on certain dates.

Establishing a tripwire like this streamlined the decision process. It saved me time. And it let us establish a threshold for success right up front. I believe that leads to better decisions because we’re not setting a goal for an experiment after the experiment has already been run.

This means a good tripwire can be thought of as “If we’ve achieved this by that date, we’ll do this thing next.” You can see how the examples I’ve shared fit this model. For example, “If we can successfully complete the first coding experiment with this new technology within two days, we’ll move on to the second experiment.”

How Have You Used Tripwires in Your Decision Making?

Tripwires are a technique for chaining or stacking decisions. When making one decision, you establish criteria that will make the next decision for you.

How have you used tripwires in your decision-making? Please share your thoughts and examples in the comments below. 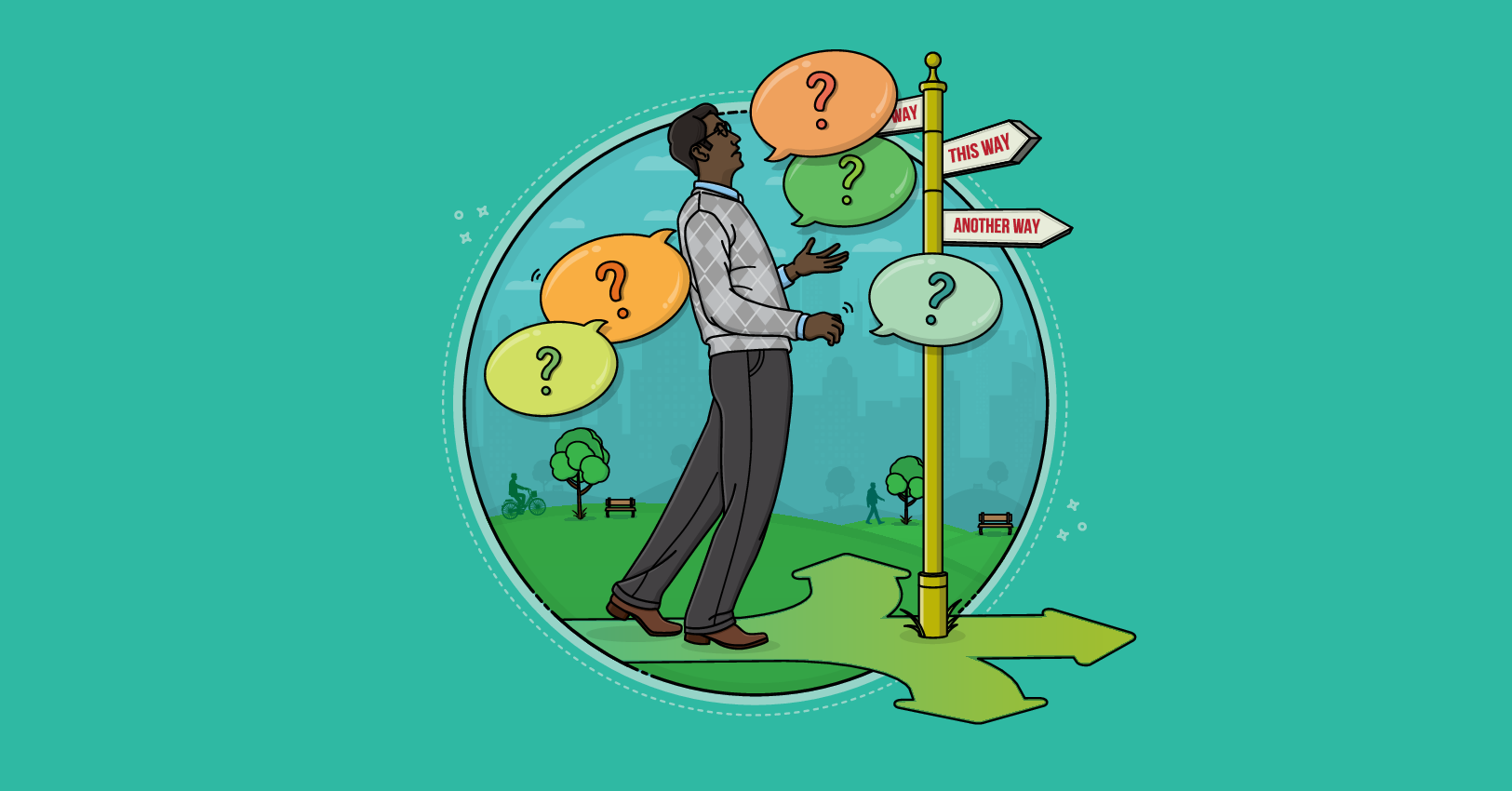