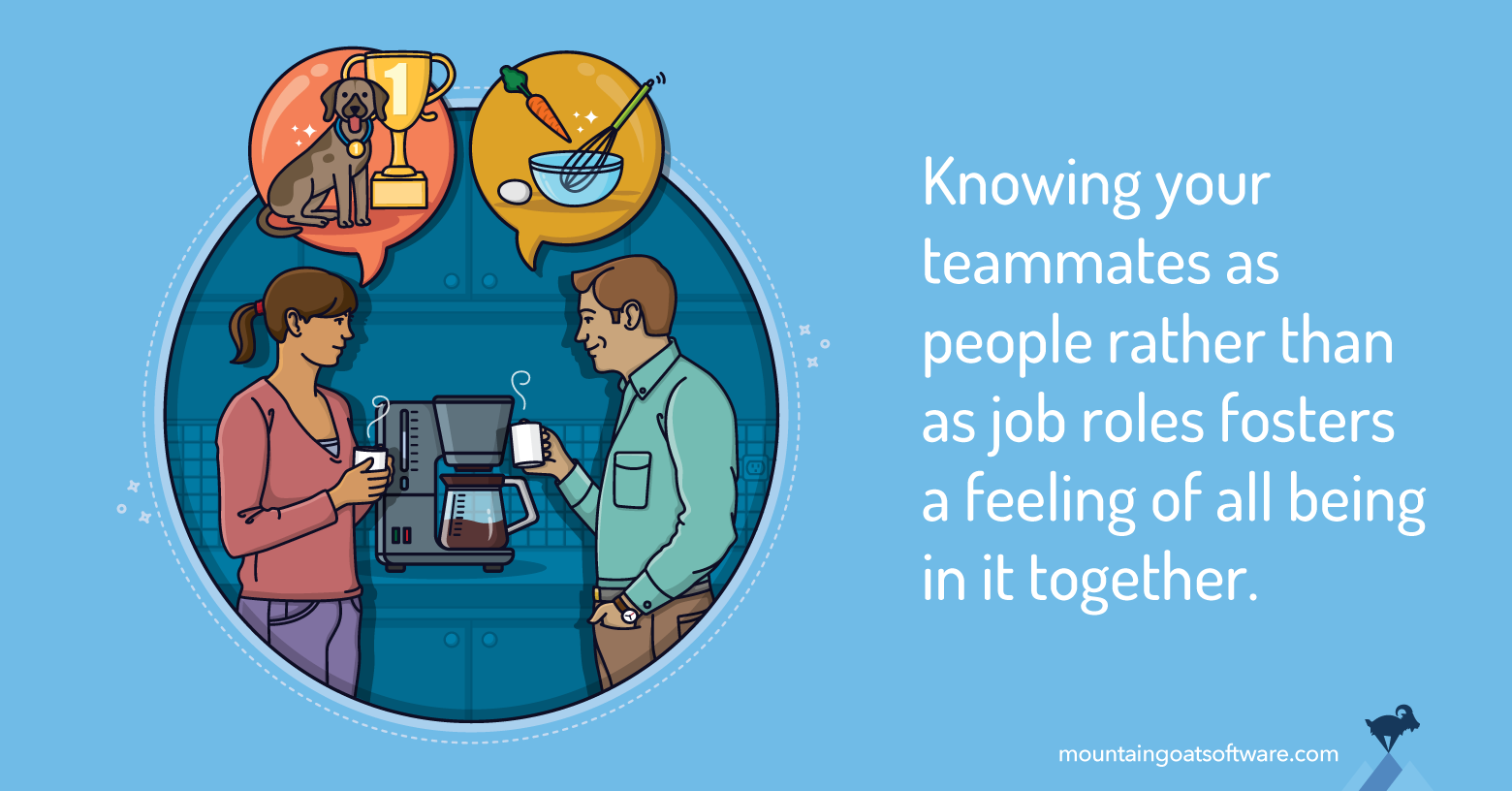 One of the benefits of being on a team is the friendships you can make with your teammates. Many of my closest friends and most important relationships are with former teammates. Some of these friendships have lasted twenty or more years since we last worked together.

None of these friendships formed just because we worked together, though. Sure, the bond between us was forged stronger because of the crucible of delivering something each sprint.

But what really grew these relationships was learning about a coworker’s interests and skills beyond the mundanities of work.

Collocated team members have more opportunities to learn about each others’ non-work skills and interests. Two team members get coffee in the break room at the same time. While waiting for the coffee to brew, they talk. They don’t talk about anything particularly important. They just shoot the breeze, as it’s commonly called.

These conversations happen naturally and many times each day for collocated teams. Distributed teams, however, have to deliberately set time aside to have these seemingly random conversations. There is no shared, virtual, coffee room we each take breaks in. (Although there are now some products that try to recreate this.)

When I think through all the best teams I’ve either been apart of or worked with, there was a bond among teammates that went beyond work. Members of those teams enjoyed one another. They didn’t all necessarily hang out together outside the office, but subsets of each team usually did.

Rather, these teams had put in the effort to learn little things about one another. One team member had competed in the Olympics. Another raised show dogs. One had been a drill sergeant in the Army. Another told us his father-in-law installed a lock on his liquor cabinet after that team member drank a bottle of his father-in-law’s best Scotch. Another claimed to make the world’s best carrot cake; a claim we challenged and forced her to prove--multiple times.

Did any of this directly help us build successful products. Not really. But knowing little things like this about each other helped us indirectly. Team members had more empathy for one another. When one colleague arrived late and was irritable, we could all guess that she’d had more problems with the staff at the nursing home her mom had recently been moved to.

Knowing your teammates as people rather than as job roles (like Kristy-the-DBA) helps foster a feeling of all being in it together. When teammates feel mutually invested in each other’s work, they’re more likely to help one another. Rather than thinking, ”The DBA is behind. Oh well,” I’m more inclined to help if I feel any sort of personal connection with the person.

A good way of establishing these connections is by incorporating a bit of small talk into a team’s regular routines. I find this especially important and useful for a distributed team, or any team that doesn’t have natural opportunities to interact.

Specifically, one good opportunity for doing this is at the start of the daily scrum. Tell the team that the first five minutes are devoted to mandatory small talk. In a moment, I’ll give you some good ice-breaking questions you can use to initiate that.

For some teams, this extra investment will be worth it. For others, maybe doing this twice a week or even just once a week is enough. And it shouldn’t be a permanent thing. You do this to initiate learning about one another. Once that has taken place, the hope is that some individual connections have been made and that learning about each other will continue but in less formal ways.

An alternative to doing this before the daily scrum is to devote perhaps ten minutes in each retrospective to this. Pose an easy question to the full group (“What’s your favorite movie and why?”). Or pair people up and give them the question in advance. The pairs are told to discuss the question before the retrospective. Then during the retrospective, participants share their partner’s answers. So, if you and I had paired, you’d explain why The Godfather is my favorite movie and why it’s even better than Godfather II.

Perhaps not surprisingly, a good source for questions to prompt useful conversations can be found by searching online for things “good questions to ask on a first date.” Below are some of my favorites.

Do you agree it’s important for team members to learn things about one another? How have you done that on teams you’ve been part of? What are some of your favorite questions to get to know someone? Please share your thoughts in the comments below.


25 Questions to Help You Know Your Teammates Better 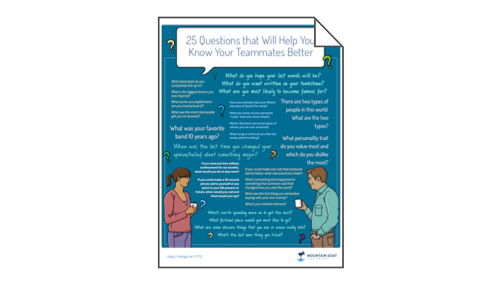 Sign up for Mike’s Weekly Tips and receive this free PDF.