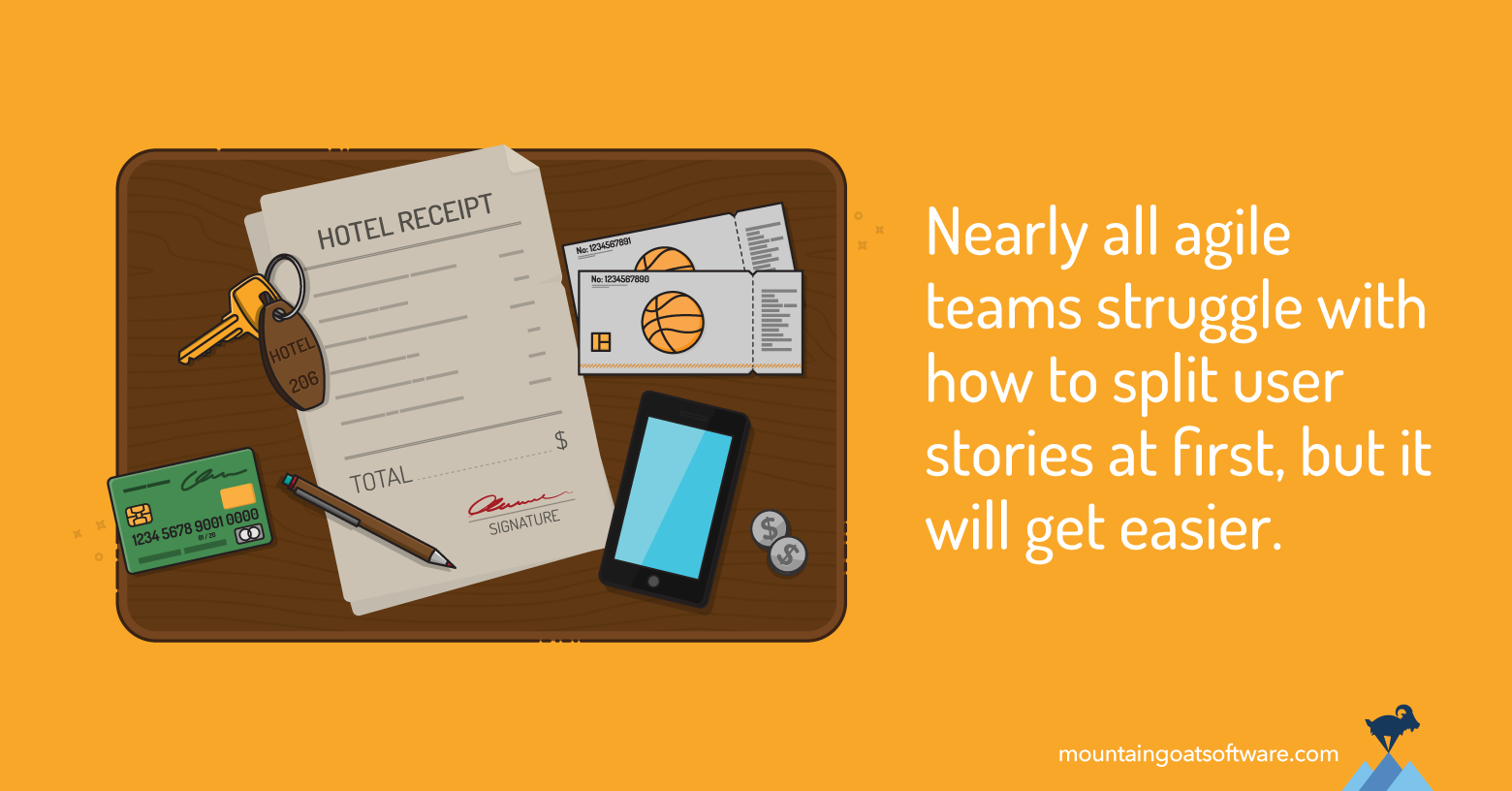 A Scrum trainer recently asked for a couple of good, real examples of large user stories (epics) being split into smaller stories. I thought it would be useful to share those examples here as well since the companies where these came from gave me permission to share them.

This first example is from a company that sells software to large retailers--think of WalMart or a company such as that. The target user is a vice president of marketing who is trying to figure out how to spend the ad budget. The user's big goal is this first story, an epic:

1: As a VP Marketing, I want to review the performance of historical promotional campaigns so that I can identify and repeat profitable campaigns.

The team working on this said it was clearly an epic and so I asked them to split it. They turned it into:

[Note I'm numbering these stories in a way to make it easy to see which story came from which parent story. On a real project I wouldn't necessarily do that unless I were using a tool that did it automatically.]

I didn't know if 1a or 1b were large and should be split again. So I asked the team, "If I were to ask you to estimate these, what unit instantly pops into your minds--hours, days, weeks, months or years?" For 1a they said days, so we left it alone. For 1b they said weeks. We split it up into:

Each of the stories above was reasonably small ("our estimate of these would be in days"). However, each needed one more level of detail, called a story's "conditions of satisfaction," which are essentially high-level acceptance tests. For 1b2 (the televsion story above), they wrote the following on the back of that story's index card:

Let's look at another example. This one is from a company I worked with that was in the revenue maximization business. The idea was that a hotel wants to charge as much as it can for its rooms. They set room prices based on a large number of factors such as what other hotels are charging, the time of year, any known local events (e.g., if the Super Bowl or World Cup are in town, the rates go up). Here was the initial user story, an epic:

1: As a hotel operator, I want to set the optimal rate for rooms in my hotel.

To keep this example a little simpler while still using real stories from this product backlog, let's assume the hotel has only one type of room. As I've said, a number of data elements can affect the desired price of a hotel room. The general formula for pricing a hotel room then becomes this:

RoomRate is a function of a variety of factors. For each factor there was a story such as these:

Story 1a is really just saying that prior year pricing information is used in the RoomRate function. Story 1b says that what comparable hotels are charging is also a factor int he RoomRate equation.

These stories are interesting in that each was fairly large (an epic) on its own. It would be impossible to implement all of them in one sprint as there were many more than the two above. As each was implemented, the RoomRate function above would calculate the wrong price because it was being built first as:

So if after one sprint the calculation is RoomRate = f (a), the system is generating the wrong RoomRate (so it can't be shown to customers) but it is being calculated with the right math as far as can be done. Maybe values for (b) and (c) are hard coded or maybe they're just ignored. But working this way allows complex algortihms like that to be built up incrementally.

But because story 1b above is too big, here's how it was split:

Here were a couple of additional stories:

I find that learning how to split user stories is something nearly all teams struggle with at first. My experience is that sometime within the first year of doing it, things start to click into place and team members discover all the little local patterns for story splitting unique to their domain and types of projects. So, if you're relatively new to agile or user stories, stick with--it will get easier.