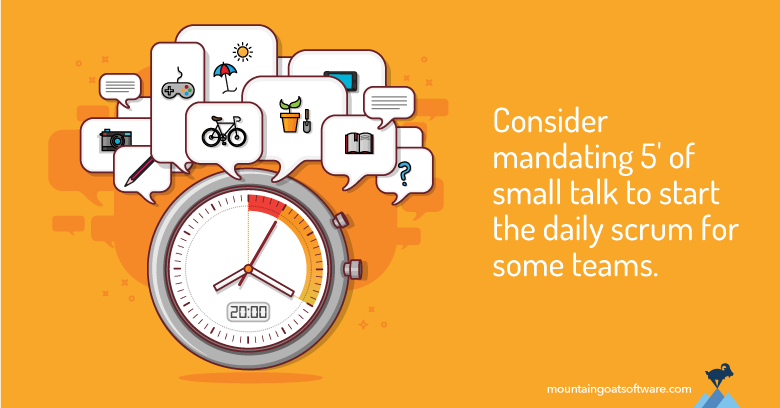 Standard Scrum advice is that the daily scrum is strictly time boxed to fifteen minutes. Don’t dare let it go any longer than that. I want to share an example of how I sometimes have teams throw that rule out the window.

One challenge distributed team members face is getting to know one another. Members of a collocated team get to know one another through small talk. You and I get in the elevator together and ask each other innocuous but friendly questions: Do anything this weekend? How old are your kids now? and so on. This type of water-cooler conversation doesn’t happen with distributed teams.

Further, a distributed team’s meetings rarely have any of the playfulness that may occur with a collocated team. I’ve seen members of a collocated team hold up a rubber rat when another members goes too deep into a topic (referred to as “going down a rat hole”). Even if team members could do things like that when distributed, they often don’t know each other well enough to feel comfortable doing so.

As a ScrumMaster for a distributed team, I find it important to help team members get to know each other well enough that they can exhibit this type of playfulness. A great way I’ve used to do that is by starting each daily scrum with a bit of small talk--the type of conversation that happens naturally when collocated but won’t with a distributed team unless someone explicitly makes time for it.

I’ve gone so far as to tell teams that their daily scrums are required to start with five minutes of mandatory small talk. No mention of the project is allowed. Team members need to talk about their hobbies, what their kids did the night before, the great movie they went to, or things like that. After a mandatory five minutes of this, we start the normal part of the daily scrum, which is time boxed to a further fifteen minutes.

One of my favorite things to hear about during this part of a daily scrum is how team members in a different country will be celebrating a holiday. For example, on next Friday my friends in Norway will celebrate Syttende Mai, Norwegian Constitution Day. The first time I was on the phone with Norwegian team members and they told me they’d be off on May 17, I wanted to know what type of a holiday it was. Was it one of those holidays when you have a big meal with family (like US Thanksgiving)? Or was it a holiday best spent outside with friends (like US Memorial Day)?

Similarly, when on the phone with members of a London-based team I got to find out what Boxing Day was all about. I’d certainly heard about it despite living my whole life in the US. But I had no idea why the British were so anxious to put on boxing gloves and all fight each other. I also learned why they care about “bank holidays.” In the US, I’ve never cared when the banks were taking the day off.

I’ve learned about all manner of holidays from working with distributed teams this way. More importantly, though, I learned little details about the lives of my remote teammates. And that helped us all work together better. So, while I fully support a fifteen-minute time box to the daily scrum, for some teams, I will occasionally add another rule that we start with five minutes of small talk. I suggest you try it, I bet you’ll learn a great deal more about your remote teammates.