ScrumMasters Should Not Also Be Product Owners

Hey, ScrumMaster: Step away from the index cards! You should not be a team’s product owner if you are also the team’s ScrumMaster.

Different individuals should fill these two roles, and there are many reasons for this. Let’s consider a few of them in this post. 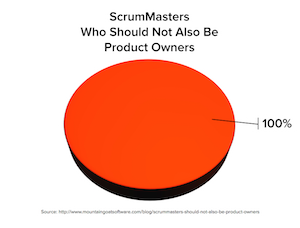 Each Has a Different Focus

First, a product owner and ScrumMaster are focused on different aspects of a Scrum project. The product owner spends his or her time thinking about what to build. That should largely be determined independent of the capabilities of the team, which are the concern of the ScrumMaster.

That is, while a product owner is determining what to build, the ScrumMaster is helping the team work together so they can.

In many ways, this can be thought of as similar to the idea that a team’s programmer and tester should be separate. Sure, a good programmer can test and a good tester can program. But, separating those roles is usually a good idea.

Each Is Probably Pretty Busy

Second, it is quite likely that being either ScrumMaster or product owner requires full- or near full-time attention. Putting one person in both roles at the same time will almost certainly shortchange one of the two.

There is some overlap in the skills and personality traits that make good product owners and ScrumMasters. However, the roles are different, and it is extremely unlikely that someone will be able to excel at both, especially at the same time.

I’ve written elsewhere about how the different types of tasks each performs makes this so.

A Natural Tension Exists Between the Roles

Additionally, a natural tension should exist between the two roles. Although each is undeniably committed to the success of the product or system being developed, product owners naturally want more, more, more.

ScrumMasters, on the other hand, are more attuned to the issues that can arise from a team under undue pressure to deliver more, more, more. When a balance exists between the roles, a product owner is free to follow his or her natural tendency to ask for more, safe with the assurance that the ScrumMaster is there to prevent pushing too hard.

Are There Ever Exceptions?

Certainly. I’ve encountered many situations in which the ScrumMaster and product owner were the same person, and where I felt that was appropriate. Some of these have included small organizations that could not afford the luxury of dedicated or separate individuals.

Other situations were small teams who had started in the pursuit of a technical product owner’s vision. On such small teams, any one personality can have an outsized effect on the team, regardless of any formal role played by the person.

Other exceptions have been ScrumMasters involved in contract development. It is common on such a project for the “true product owner” to exist within the client asking for the software to be built.

Unfortunately, it is also common for such true product owners not to want to be deeply involved in the project at the level a Scrum team needs. It is in these cases that a good ScrumMaster often steps up and into the role as a proxy for that true product owner.

So, sure there are exceptions—just like there are to any rule. However, none of those exceptions should exist for the long term. And anyone in both roles simultaneously should be aware of the challenges the dual role presents.