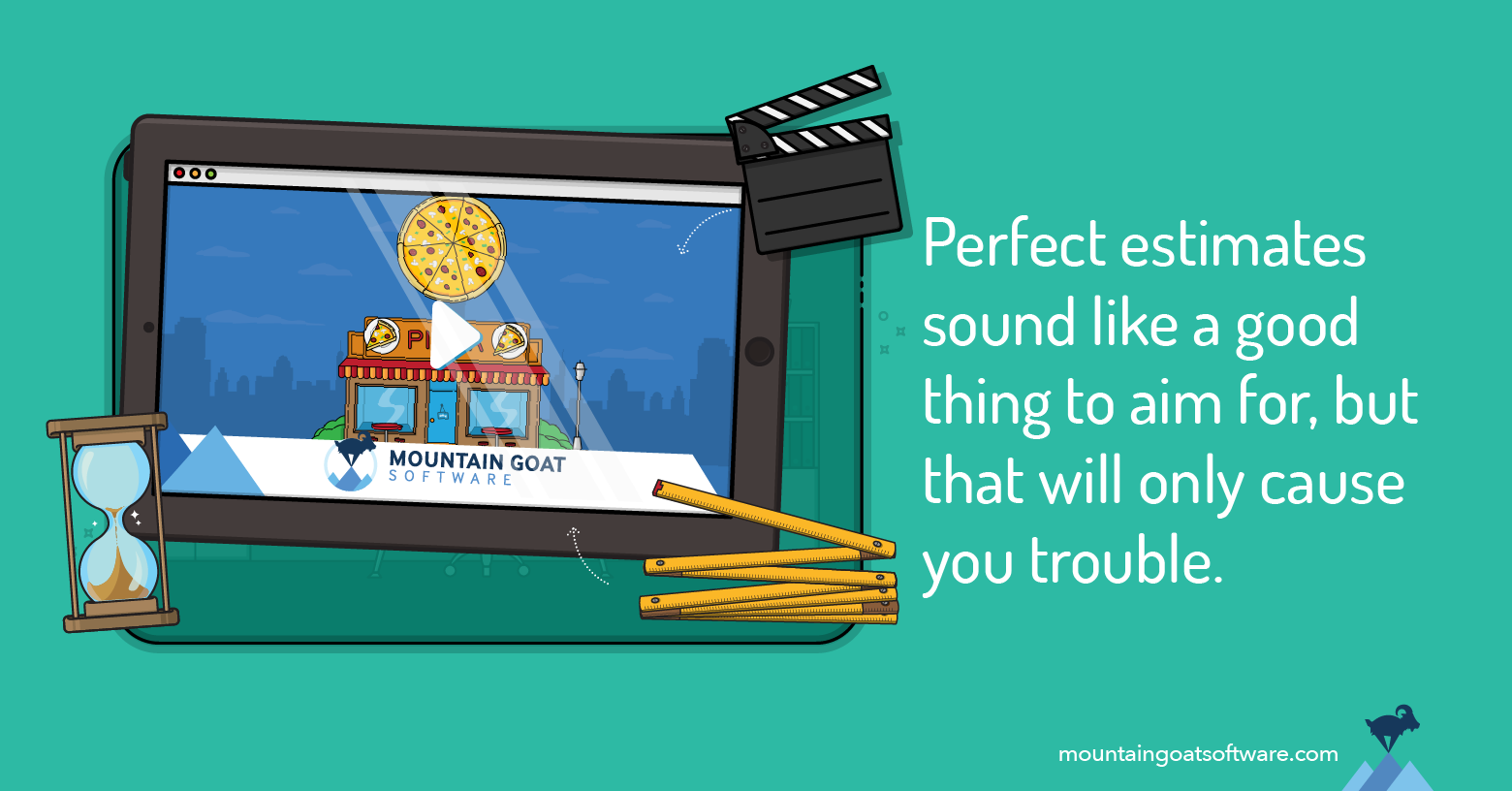 Today’s post introduces the second installment in a series of free training videos tackling common problems teams face when estimating with story points. The training will be available until Wednesday, April 21 9 p.m. Pacific. To watch this video and find out when the next video is released, sign up here.

In video one, I shared a sample of feedback we received about our coaching advice, designed to help teams resist the temptation to equate points to time.

But even when teams do understand this, they can run headlong into another problem:

The problem of perfection.

Video #2 Getting Hung Up Trying to Create Perfect Estimates

One problem teams face when trying to create ‘perfect’ estimates (other than the fact that perfect estimates don’t exist) is that teams and stakeholders aren’t all in agreement about what an estimate is, and how it should be used.

Management needs to prioritize work, and they also love metrics. So they tend to push for estimates that will tell them when something will be done.

But most teams can tell you: managers can take an estimate as a promise and become angry if it’s missed. Uncomfortable situation.

This can lead to teams padding their estimates to avoid punishment, but it’s a terrible idea to do this (watch the video to see why).

Elaine could relate to this. Her team was being forced to give estimates that were used for burndown. Video 2 gave her some new ideas to try:

I could relate so much to Video 2. Unfortunately for me I am in that 'rare' space where my teams have to provide estimates that will be used to burndown towards a product launch deliverable a year away. Estimates are viewed as absolutes by some management. The teams are stressed. And I am struggling to get through to the management level who are pushing them. This video will certainly help. Thank you very much for sharing.

Chris Exley was also facing this same challenge—and liked the ideas he learned in the training video on how to explain it to stakeholders and management.

Very good series about story point estimating, Mike. I really appreciate your insights and tips. I have been fortunate to follow in the footsteps of others who trained our early adopters of agile well in this regard. Our teams do well in relative estimating but you brought out some extra points where we could definitely improve. Your discussion about best-case/worst-case scenarios and getting individuals and teams estimating the same thing was very helpful. I will also be using your graph to help management and stakeholders understand where our teams are estimating and what that exactly means. Simple but very useful tools to add to the old agile tool belt! Thanks for sharing!

Perfect estimates don’t exist, but that doesn’t stop teams trying to create them. Have you experienced this? Have you struggled to explain to stakeholders that estimates are not a guarantee? Register to watch the videos and join in the discussion there, or leave a comment below.