I Didn’t Know I Needed That!:

Finding Features to Satisfy Your Customers

It is essential that the products we develop satisfy our customers. A product that fails in this regard is unlikely to be around for very long. Unfortunately, many companies and development teams do not consciously plan for how a product will satisfy their customers. The problem with this approach is that if you don’t have a plan for customer satisfaction, you probably won’t achieve it.

When planning to develop a desirable new product, it is useful to group features based on their potential for impacting customer satisfaction. One technique for doing so is known as Kano analysis, after its originator Noriaki Kano. In this approach, features are segregated into three categories— mandatory, linear, and exciter. The differences between these types of features are shown in Figure 1.

Mandatory features are those that are required for a product to be competitive in its space. For a mobile phone, mandatory features are a speaker, a microphone, a numeric keypad, and so on. A manufacturer should not plan on building a phone that is missing any of these features. The line through the bottom right of Figure 1 shows that no matter how much of a mandatory feature is added, customer satisfaction never rises above the midpoint. I don’t want a horrible microphone on my mobile phone, but improving the quality of the microphone can only increase my satisfaction with the phone up to a certain point.

Linear features (shown by the diagonal line through the middle of Figure 1) are those for which customer satisfaction is directly related to the amount of the feature present. Your satisfaction with your cell phone increases linearly with the battery life of the phone. Similarly, the more minutes included in your monthly plan, the more satisfied you become. Linear features have a direct bearing on the price of a product. The longer a cell phone can run without having its battery recharged, the more you are willing to pay for the product. In some cases you may pay extra for the phone itself; other times you’ll pay more by purchasing a second battery.

An intriguing and nonintuitive aspect of customer satisfaction is that sometimes the feature that provides the most satisfaction is one that customers didn’t know they wanted until they saw it. For example, before a camera practically became a standard feature on cell phones, did you even know you wanted a camera on your cell phone? These types of features are known as exciters and are shown by the upward-pointing arrow that begins at the upper left of Figure 1. This arrow indicates that even a small amount of an exciter can dramatically influence customer satisfaction with the product. Mobile phone manufacturers, for example, started with low resolution, limited-capability cameras. That was enough at the time for the camera to be an exciting addition to a mobile phone. It is often worthwhile to include an exciter in a new product because customers will pay a premium for the exciting feature. 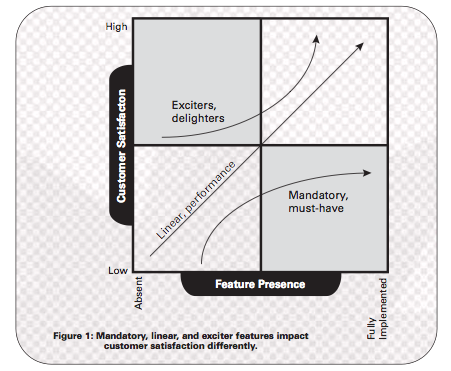 Let’s look at how to determine whether a feature is mandatory, linear, or an exciter and consider advice on how to combine feature types into an optimal product.

We can think about a feature and make a reasonable assessment as to whether it is mandatory, linear, or an exciter. If we rely solely on our own judgment, however, we will certainly make some mistakes. What is exciting to us may not be exciting at all to the prospective users of our product. This is especially true if our backgrounds and goals are not closely correlated to those of our product’s users. We’ve seen too many products that developers deemed exciting but ended up being of no interest to users.

For these reasons, it is generally best to survey a set of prospective users about the features under consideration. I see a lot of surveys of this nature, and most of them make the same mistake. They pose the question to the user from a single perspective, usually asking something like “How important is this feature?” Users then are allowed to respond with a range of answers from “unimportant” to “very important.”

Asking about feature importance in this way provides limited information. For example, suppose a few years ago you had asked prospective mobile phone buyers “How important is having a camera in your mobile phone?” Most likely, they would have told you that it’s not very important. However, they might have finished the survey thinking, “I hope they include the camera; that would be great. What a wonderful new idea.” The feature is an exciter, even though a one-dimensional survey doesn’t reveal it.

Suppose instead of asking how important a feature is, you ask how desirable it is. You would get different results and might find out that having a camera in a mobile phone is highly desirable. However, users would also respond that having a backlit number pad is highly desirable for night use. From the responses to a single question, you would have no way of discerning that the backlit number pad is mandatory and that the camera is an exciter.

Suppose we are building a reporting tool for users within our company and are contemplating four new features:

To determine whether each of these is a mandatory feature, a linear feature, or an exciter, we ask prospective users:

The first pair of these questions and hypothetical answers from one user are shown in Figure 2.

Think about the pair of responses in Figure 2. The one user who answered these two questions has said that she’d like to be able to export directly to PowerPoint (the first question), but also that she does not expect the feature to be present. A feature that a user would like but does not expect to get is an exciter, an opportunity to add unexpected value.

Figure 3 provides a way of cross-referencing the functional and dysfunctional forms of a question pair, so that a prospective user’s responses can be reduced to a single meaning. We can cross-reference the answers shown in Figure 2 with Figure 3 and discern that the feature is an exciter. Similarly, if a user says that she expects to be able to save a report and dislikes it if she cannot, we can cross- reference those answers and see that saving a report is a mandatory feature. 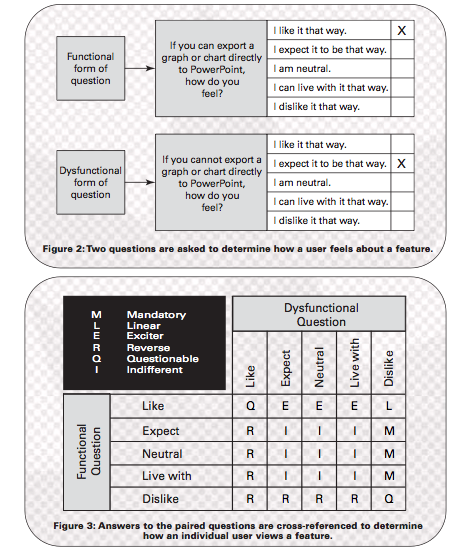 In addition to the three feature types discussed thus far, Figure 3 introduces three other results—reverse, questionable, and indifferent. A reverse attribute indicates that the user would like the opposite of the feature being proposed. For example, suppose you think your e-commerce Web site should automatically log out a user after five minutes of inactivity. To determine how users feel about this question, you would ask these two questions:

Suppose a user answers that she is neutral about being automatically logged out, but she likes it if she is not. This user is telling you that you are contemplating a feature that will have a negative impact on her satisfaction with your product.

Questionable features result when it is unclear how the user feels about a feature. If you look at Figure 3, you’ll notice that questionable results are obtained when the user likes it when a feature is both present and not present, or when she dislikes both its presence and its absence. Response pairs like these happen when someone gets confused while answering a survey.

An indifferent feature is one the user doesn’t care about. A lot of software programs (such as Word, which I used when writing this article) include the ability to split a window into multiple panes. I never use that feature, and if surveyed about it, I would respond that I am neutral regarding both its presence and its absence. Including an indifferent feature will not improve customer satisfaction.

The individual results obtained by cross-referencing answer pairs in Figure 3 are aggregated to arrive at an overall category for each feature. After all, we’re not as concerned with what individual users think as we are with what users think overall. Useful results often can be obtained by surveying as few as twenty or thirty likely users of your product. After results are tabulated, they are expressed in percentage terms and can be presented as shown in Table 1.

Table 1 shows the percentage of respondents who consider each feature an exciter, linear, mandatory, indifferent, reverse, or questionable. The final column indicates the overall classification of the feature based on an interpretation of the results. Exporting a graph or chart to PowerPoint is an exciter based on a preponderance of user opinions.

Most of the responses indicate that the scheduling a report feature is mandatory. However, almost as many people considered it linear. Rather than simply calling the feature mandatory, a feature with two high responses often warrants a bit more thought. Results like this usually mean that two distinct audiences have been surveyed about the product. In this case, let’s suppose one type of user will be running reports for her workgroup or department. Scheduling is critical for this type of user, and she considers the feature mandatory. The other type of user plans to run her own reports and usually no more than one or two a day. Because of her lighter use, this user would like the feature but does not consider it mandatory.

Which Features to Include?

This article began with the claim that it is important to have a plan for achieving desired levels of customer satisfaction. Having come this far—surveying a set of prospective users, cross-referencing all answer pairs, and aggregating all results— how can we use this information to make sure we are planning a product that will satisfy our intended users?

First, all mandatory features must be included in the plan. Next, the product plan should include as many robustly supported linear features as possible. However, a little room should be left in the plan for at least a few exciters—they go a long way toward boosting customer satisfaction and often enable a product to be sold at a premium.