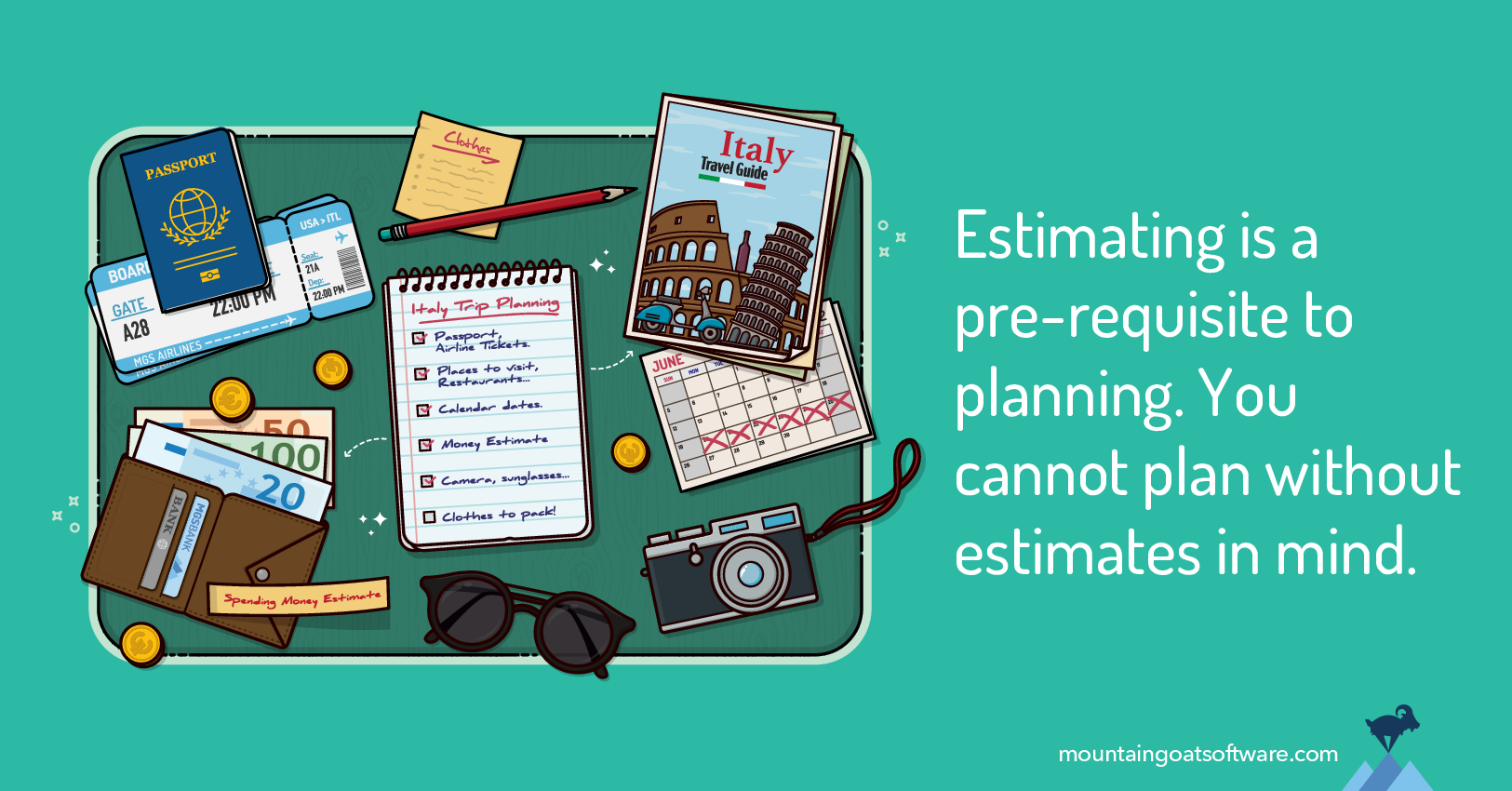 Estimating and Planning Are Necessary for Maximizing Delivered Value

Because I'm so interested in estimating and planning, I always take notice when I see a new blog post or news group posting claiming, "Estimating is waste! Don't do it!" The thing that never shocks me about these arguments against estimating and planning is that they never come from the business people for whom we are developing products or systems. They understand the value of estimates and plans (and the shortcomings of poor estimates and plans).

Let's consider that perspective for a moment. How many significant things in your personal life would do without at least some planning first? I doubt you would plan a wedding, a relocation to another city, a holiday trip, or any such event without first engaging in some amount of planning.

Suppose you are considering a first-ever trip to Italy. You would plan that--which cities? how long in each city? what's your budget? and so on would be some of the questions you would consider. Now suppose you are planning your one hundredth return visit to the city in which you grew up. You will even plan this trip--even if the extent of that planning is to decide you don't need to plan at all.

Planning is the act of thinking about the future. Sometimes that future holds risk and uncertainty. In those cases we plan more than when the future is highly predictable as a hundredth visit to your childhood home town would be. When a future activity is highly predictable, planning may consist of nothing more than a few milliseconds of rejecting the need to plan further.

Of course on a software project it is rarely this simple.

What about estimating? Do we really need to estimate? Yes, because estimating is a pre-requisite to planning. You cannot plan without estimates in mind. Those estimates may be very informal and very implicit. As I write this I am on a flight to California. Before boarding the plane I got cash from an ATM. I estimated my upcoming need for cash to do that. $200 should do it. That estimate took less than a second and I was perhaps not even conscious of it, but it was made.

When a product owner says, "I'd prefer to add this feature rather than that feature," the product owner is acting with at least some implicit estimate (perhaps guess) of how long each will take. When a programmer chooses late in the day to fix a bug rather than start a new user story before going home, that programmer has made an implicit estimate that fixing the bug fits better with the hours left in the day.

These estimates must be made. Yes, they can be subconscious but they are made. Those who blog and post to newsgroups saying "estimating is waste, don't do it" are ignoring these types of estimates.

But are these casual, perhaps subconscious, estimates OK? Wouldn't teams be better with formal estimates?

Perhaps but not in all cases. A team should estimate and plan only to the extent that further investment in estimating and planning will lead to different actions. If you will do the same thing even if you estimate or plan more, stop. But if further planning is likely to lead to better decisions (more confidence in a delivery date, better prioritization of functionality, or so on), then estimate and plan further.

As an example, we recently added quite a bit of functionality to this website to support our new eLearning course on Agile Estimating and Planning. I did not ask the programmer who did that work to give me more than cursory estimates. I'm still enough of a programmer to have an idea how long the new features would take. I've worked with him long enough to know how fast he is. Asking him for detailed estimates would not have changed anything about that project.

So estimating and planning are necessary. They can (and should be) lightweight. You should stop when further planning is not likely to lead to improved decisions worth the extra effort.


Join us for the Better User Stories Webinar

Join us for the Better User Stories Webinar