I want to use this month's blog posting to introduce a type of burndown (and burnup) chart that I find useful. I've been drawing this style of burndown chart for years and have coached many of my clients to do the same. Unfortunately, we've had to draw it either by hand or in tools like Visio and OmniGraffle because the agile tool vendors haven't (to my knowledge) hit on this idea yet. I'm hopeful that some of them will see this posting, decide this is a good visualization, and incorporate it into their products. The classic Scrum release burndown chart is good at showing whether a team will finish "on time" as can be seen in the following example burndown chart: 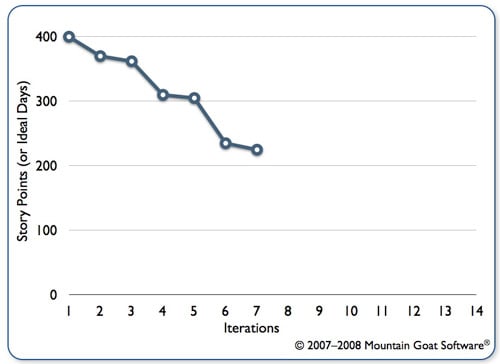 A release burndown chart such as this one shows sprints on the horizontal axis and can show story points or ideal days on the vertical. It is updated once per sprint to show the team's net progress that sprint. A team's net progress is the amount of work they finished net of any changes in scope. So a team that completes 30 points of work but that has 10 points added to their product backlog will show net progress of 20. But while a traditional release burndown chart excels at showing whether a team is on pace to finishing on time, it is not very good at showing what will be included in that "on time" delivery.

To see this, imagine two teams that each start with 200 story points of work. The first team finishes twenty points of work for each of ten sprints. The second team is incompetent and rather than completing twenty points each sprint they drop twenty points of scope each sprint. The two burndown charts will be identical--perfect lines descending over ten sprints from 200 to 0. At one level this is OK: the burndown chart shows whether a team will be finished (or by when the will be finished). The simplicity of the standard release burndown chart has much in its favor. It isn't hard, though, to extend a release burndown chart to also show what will be in the product by the final sprint. Look at the next figure, which is a hypothetical example of an eCommerce product. 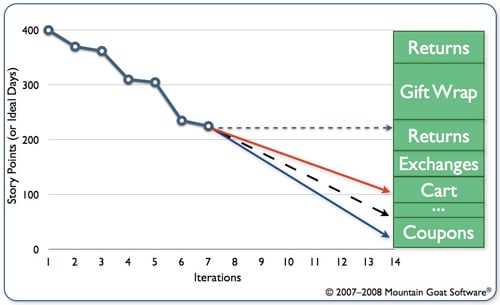 In this figure, you can see the burndown is tracked in the normal way through the end of the current sprint, the seventh. The company desires to release this product after the fourteenth two-week sprint. The right side of the burndown chart shows the team's product backlog with the highest priority theme ("Returns") at the top. This top block represents some "must-have" user stories related to returning purchased items. Below that is a theme for gift wrapping purchased items, followed by some "nice to have" aspects of returning items. At the bottom right is the Coupons theme. Extending out from the team's current position at the end of the seventh sprint are four lines. These lines represent the following:

The figures in this blog are static images I've cut from a presentation. If you apply this technique for your team, the backlog items on the right should be clickable, allowing users to drill down into a product backlog theme to see specifically which items (typically user stories) make up the backlog. By producing a single chart that shows both a team's rate of progress (its burndown) and the product backlog, we have a single visualization that shows both when a team is likely to finish and what features will be in the product by that time. This makes is easier for product owners to make scope vs. schedule tradeoff decisions. Check back in a few weeks when I'll show an even more powerful technique for visualizing large product backlogs.