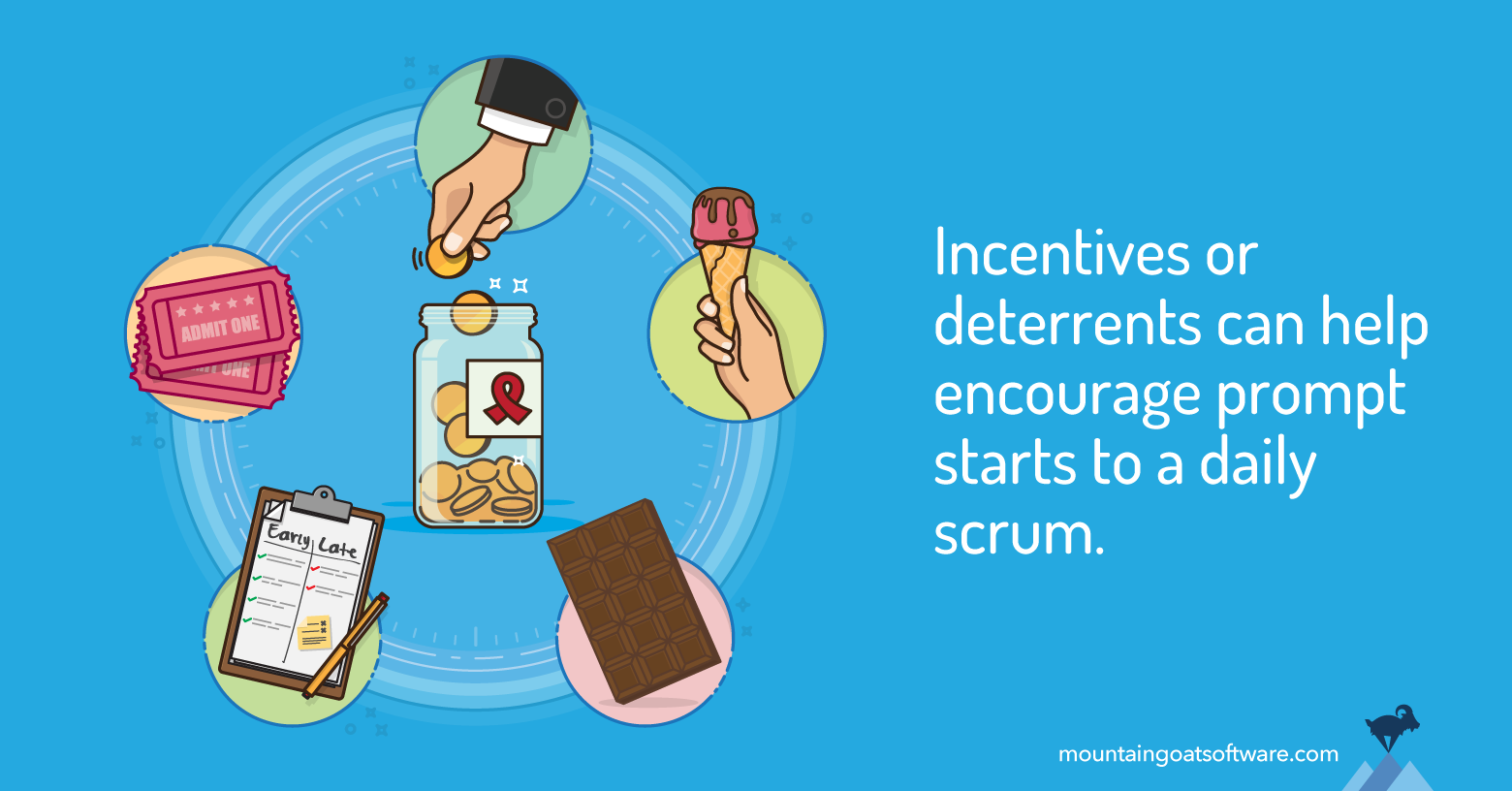 Incentives and Deterrents for Starting Daily Scrums On Time

I recently emailed everyone who subscribes to my weekly tips a list of suggestions for ways to motivate team members to arrive on time to the daily scrum. For example, many teams have a rule that if you arrive late, you put a dollar in a jar as punishment for being late. Ideally the collected money is donated to a charity at the end of a project or after it reaches a certain amount.

I included a number of other techniques I’ve seen Scrum Masters use. Many were similar to paying a dollar in that they were punishments for being late. Wow, did I get called out for that. The general argument was that a Scrum Master should use an incentive for being on time rather than a punishment for being late.

That’s a really good point. But I have to say that in the vast majority of teams I’ve seen, they use a punishment rather than an incentive. Many of the punishments involve at least the potential for embarrassing the offender--sing a song, do a pushup, tell a joke, etc.

I’ve thought about why this is. It may be because it’s more natural (for many of us?) to harass the one rule-breaker than reward everyone else. Or maybe it’s because embarrassing the late arriver by making that person sing (for example) is more fun for everyone else.

Incentives Rather than Punishments

I do think, though, that it’s a great suggestion that we look for incentives rather than punishments. Besides, punishment may be too strong of a term. I was told by a couple of people that deterrent might be the better term.

In fact, Rob Dull pointed out an underlying benefit to using a deterrent, saying, “It's sooo healthy for people to be able to be silly/awkward in front of their teammates.”

Others considered the entire idea “stupid,” as one email I received succinctly put it. While others pointed out that the only real fix is to tap into an intrinsic motivation to get latecomers to arrive on time.

Isaias Fritsch took that type of approach by preparing a 30-minute presentation for the team on the importance of the daily scrum. He said that after that presentation, the team decided to come up with some changes to their daily scrum approach. The result of this has been that “the daily scrum is now way more interesting to everyone because relevant information is shared and everyone understands its importance/why we are doing it.”

Ted Morris Dawson had an interesting take on the punishment vs. incentive idea. One technique he has used was if all team members are on time for all daily scrums, then it’s the Scrum Master who does the embarrassing thing like sing, tell a joke or so on. Yikes!

So with the idea that we can help teams overcome the problem through either deterrents or incentives, I’ve split the suggestions I was emailed into lists of each.

So, there are many ways you can go about this. And, as I said in my emailed weekly tip, I love getting the chance to learn from all of you. I definitely learned some good techniques from this. Also, I’ve learned that I really should think more about incentives rather than deterrents.

Whatever you choose to do, you really need to make sure the entire team buys into it. The last thing you want is for someone to go to human resources complaining that you’re making him do a pushup for every minute he arrives late to a meeting.

But, for a team on which being late is a problem, these approaches can help address the problem. A common thread in many replies I received was that many of these incentives and deterrents work especially well because the entire team starts holding each other accountable. This is a huge benefit over just a Scrum Master holding people accountable.

What’s missing? What other techniques have you tried to encourage people to be on time for daily scrums? Please share your thoughts in the comments below.